What is Project Management (PM)?

Project Management is the planning and execution necessary to achieve goals and objectives within an organization.

What Do Project Managers Do?

Project managers are responsible for the delivery of all components of a project. They use project management tools and techniques to successfully move work forward, on-time and on budget.

What is Visual Project Management?

The practice of using illustrations and diagrams to represent complex data or to simplify processes, so it is easier for businesses and their employees to plan, execute and control projects.

The Evolution of Project Management

Various forms of project management date back to ancient structures like the Pyramids of Egypt or the Great Wall of China. However, project management as a practice started to evolve in the early 20th century when engineering and manufacturing businesses sought better management methods and new ways to improve productivity.

Around the same time, an American productivity consultant named Henry Gantt was pioneering visualizations that made it easy for anyone in an organization to understand management processes and schedules. His diagrams quickly became a popular project management tool for planning, controlling and monitoring the progress of work. He is acknowledged as being a forefather of project management and, today, Gantt charts are the most critical tool in project management.

After the development of the Gantt chart and as projects became more complicated, others visual tools were introduced to help businesses see increasingly complex project information more easily.

The following charts are commonly used in Project Management

A Gantt chart is a type of bar chart that illustrates a project schedule. They are the most powerful visual in project management. Gantts diagram the start date and the end date for each task that must be done in order to successfully complete a project. They are widely used for presenting project plans, reporting on progress and for keeping projects on track. 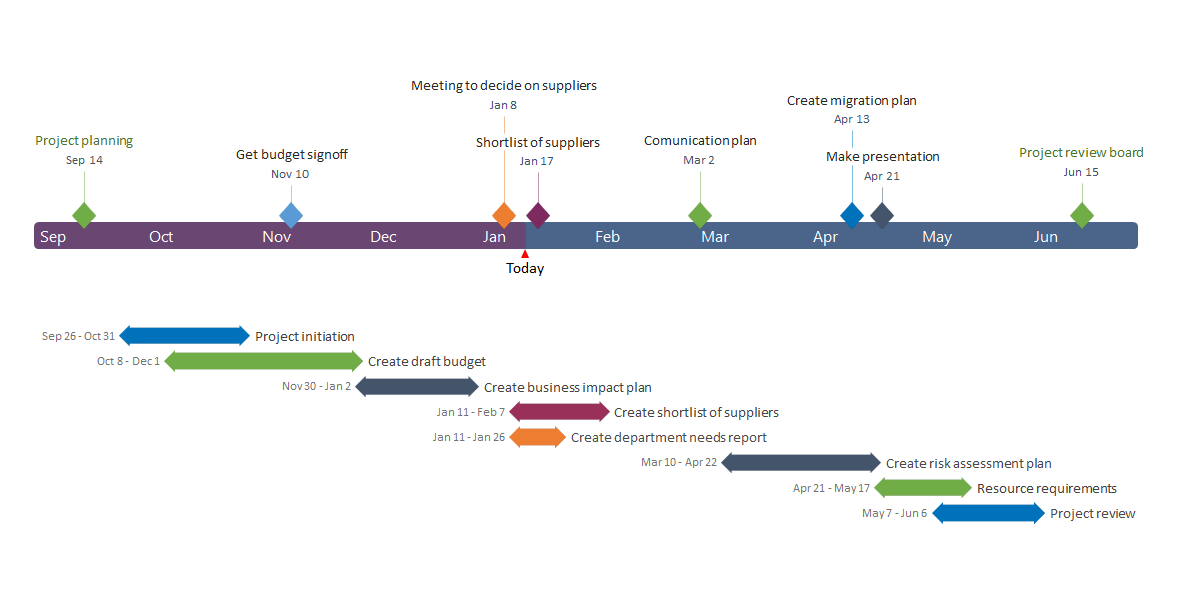 PERT charts are used after a project has been planned and broken into smaller pieces, called tasks. They show how much time is needed to complete each task and they help project managers visualize which tasks must be completed before others can begin. PERTs also illustrate what tasks are critical (critical path) and which ones are less important.

A Pareto chart is an illustration that visualizes the most important or critical items among a set. It is a diagram that consists of both bars and a line, with individual values represented on the bars in descending order. Pateros are most often used by project managers to visualize quality control issues and to prioritize problems areas.

A Work Breakdown Structure (WBS) is a project management diagram that illustrates an entire project broken down into components and then into smaller sub components. They are used to arrange a project team's work into manageable pieces and for estimating costs and time associated with each piece of work. 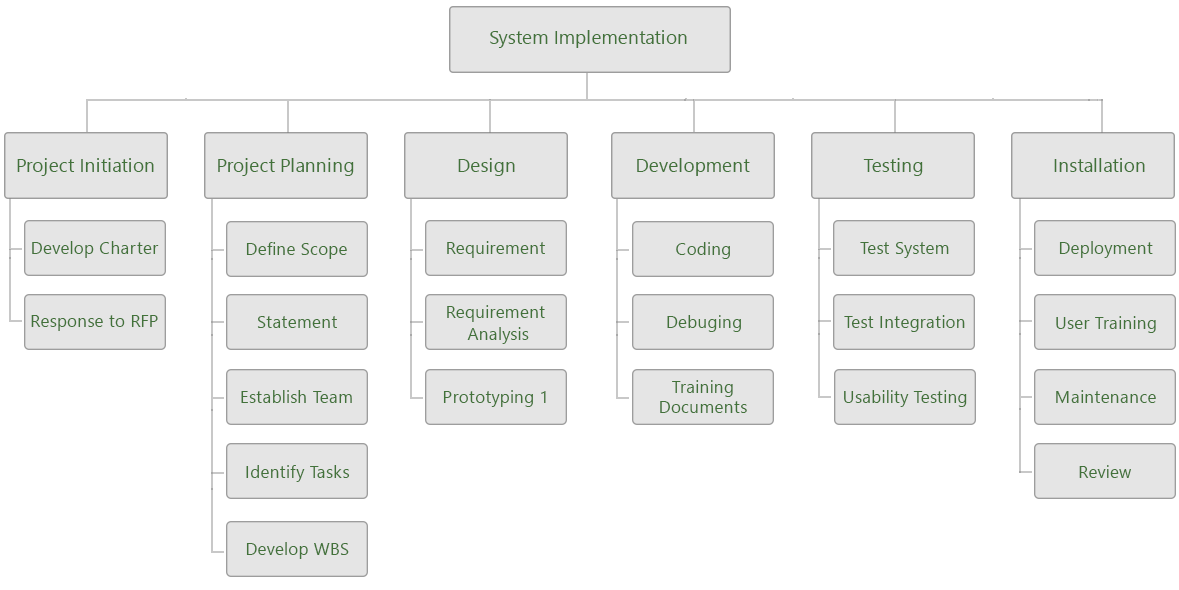 Timelines are visuals that show important events labeled in chronological order on linear time scale. They are used in project management to help teams and stakeholders understand what milestones the project needs to achieve and the delivery date for each milestone. Timelines are often displayed with project schedules in Gantt charts.

Fishbone diagrams are also called Ishikawa or Cause and Effect diagrams. They illustrate all the possible factors that could cause an outcome. Fishbone diagrams are used by project managers to help properly identify the true causes of problems, rather than assuming the most obvious causes.

Project managers often need to communicate with simple visuals that highlight many different aspects of their project management process. Office suites that contain a spreadsheet and presentation tools are sufficient to create many project visuals. For important communication to clients, executives and other stakeholders, specialty presentations tools can be used to create impressive visuals. Office Timeline is a PowerPoint add-in for creating impressive project visuals.

What is project management?

Project Management is the planning and execution necessary to achieve the goals of a professional team or process.

What are project management skills?

They are result-driven management strategies that are critical to the success of a project manager. They include the hard skills (e.g. technical skills) and soft skills (e.g. people skills) that are essential in for successfully moving a project from initiation to completion.

What is a project manager?

What is a project management process/plan?

An approach for executing a project over 5 phases - initiation, planning/design, execution, monitoring/controlling, and completion/close out.

What are some project management tools?

Although every team and organization is different, MS Office programs such as Word, PowerPoint, Project and Excel are the most commonly-used tools.

Why is Project Management important?

Which types of charts are most common in Project Management?

Gantt, Timelines, PERT, Pareto, Work Breakdown Structure, and Cause and Effect Analysis are the most commonly-used charts.

Office Timeline is an award-winning Gantt chart maker for PowerPoint. 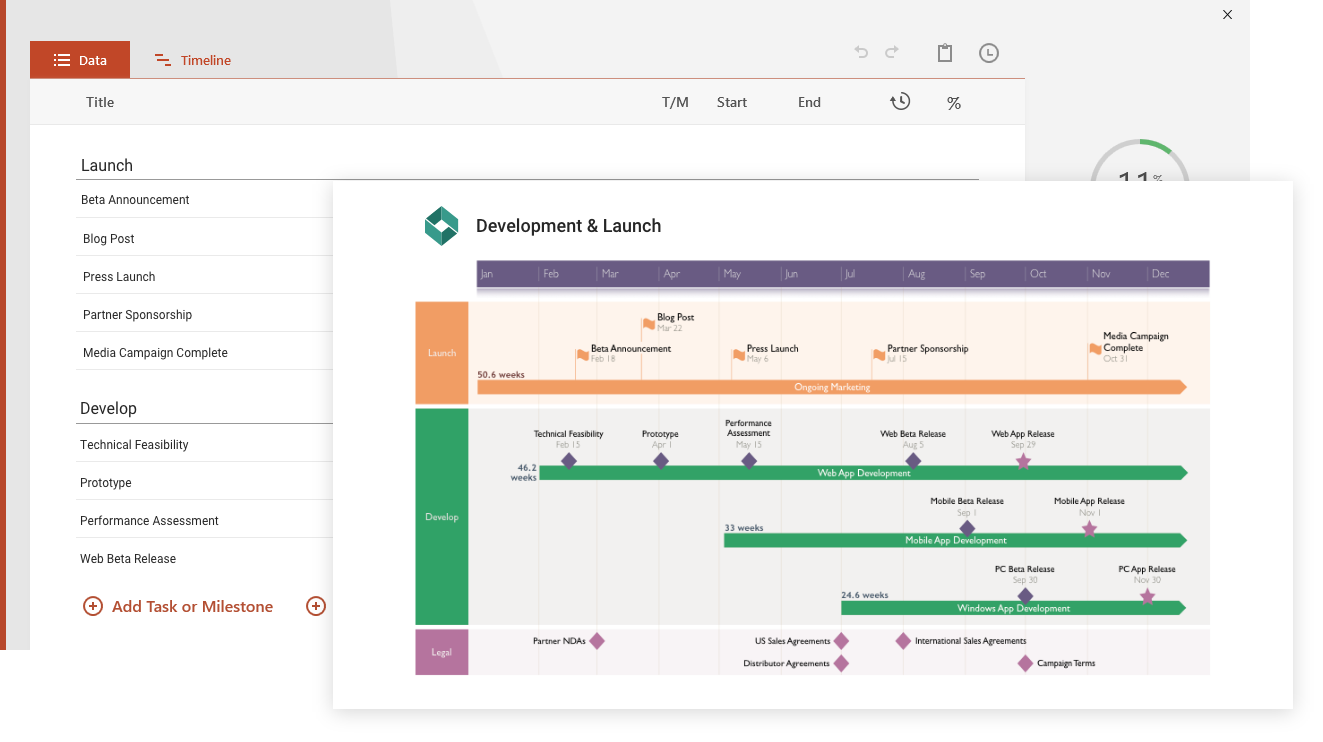